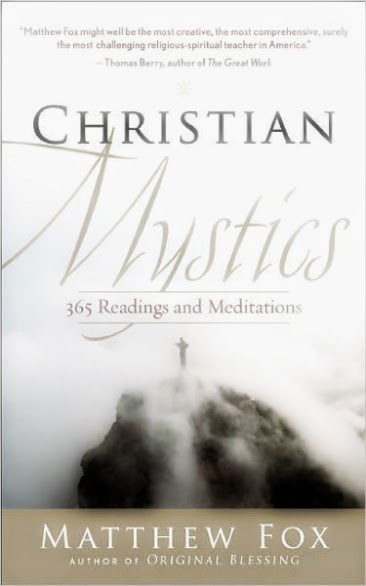 What inspired you to write this book?

If religion is going to have something to say to the younger generations it must shed much of its top-heavy churchiness and ask: What is necessary to take from the burning building of the church? What is really useful and important?

I think one of the most important contributions healthy religion can make is to turn out spiritual people--mystics (lovers of life) and prophets (defenders of the beauty of life). Jung says it is "to the mystics that we owe what is most beautiful in life." We all need nourishment and challenge and I think these mystics do that.

Which quote in the book really made an impact on you?

To be honest, they all do. But surely Dorothee Soelle's comment seems especially powerful for those who are watching the demise of the Roman Catholic church as we know it at this time and the hijacking of the Protestant tradition by fundamentalists or just plain boredom when she writes: every day I am afraid/that he died in vain/because he is buried in our churches/because we have betrayed his revolution/in our obedience to authority/and our fear of it.....

Which mystic touched you the most?

That's a bit like asking a parent: "Which child do you love the most?" I'm afraid. Meister Eckhart is one I have lived with the longest and deepest having written two books on him and having taught him for many years. But also, among pre-modern mystics, I have lived very long with Thomas Aquinas and my book on him, "Sheer Joy: Conversations with Thomas Aquinas on Creation Spirituality," is one of the few in-depth studies of his mystical-prophetic teachings. Also Hildegard of Bingen, whom I have written two books on speaks loudly today to so many who seek a green spirituality. Twentieth century includes Thomas Berry and Fr Bede Griffiths and Thomas Merton, Dorothy Day and more.

How can Christian Mysticism help out the world today?

First, this book is not just for Christians by any means. Mysticism is a common language based on experience of the Divine so what is in these pages people from other traditions can draw nourishment from I know (just as Christians or Jews can get excited on reading Rumi or Hafiz or the Tao te Ching, etc.)

The Dali Lama says the number one obstacle to interfaith is a bad relationship to one's own faith tradition and many Christians do not know their own mystical/prophetic tradition so this book hopefully can 1) awaken Christians to the treasure we hold that is so much deeper than "Jesus saves" or "obey the church" and 2) to have a deeper relationship to their spiritual lineage--the result would be far better relationships with other religions and more sharing in terms of social action and contemplative prayer. Thus peace might prevail more readily in the world and between religions.

Hopefully this book can challenge Christians and others to grow up spiritually and to renew religion the only way it has ever been renewed--by returning to the Source, by tasting the Spirit and by putting experience first. Then courage will rise, fear will not take over our hearts, and justice and compassion can replace empires as that which oversees the human heart and human relationships. We might actually create a global spirituality where the "celebration of life" is put before all else. And we might get over couchpotatoitis and make a difference in our world.

What new books are on the horizon for you?

In six weeks or so my book on the Roman Catholic Church called "The Pope's War: How Ratzinger's Secret Crusade Imperiled the Church and What Can Be Saved" is coming out. The last part of the book is about pushing the restart button on Christianity--that is the good news in the meltdown of the church that is happening before our eyes due in part but not totally to the scandal of pedophile priests and the hierarchical cover-up. I also deal of course with the condemnations of over 92 theologians, the support of extreme right wing groups like opus dei and legion of Christ and communion and liberation that have so dominated the present and past papacy. And the condemnation of liberation theology, probably the most Christ-like movement of the past 300 years.

Christianity can start all over for the 21st century and needs to offer a much simpler and more profound religion to the younger generation. This book on Christian Mystics speaks to the issue of "What to take from the burning building" because it reminds us of the depths of our heritage and how we are all called to be mystics and prophets.

Speaking personally, while writing the pope book I got so depressed by the subject matter that I had to interrupt the writing of the book to find some personal nourishment and the book on Christian Mystics provided that for me.

Posted by bookclublive at 10:55 AM