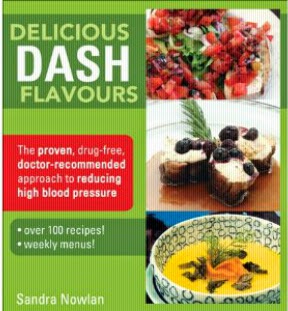 What was the most interesting part of about putting together this book?

Delicious DASH Flavours  is based on the DASH eating plan (DASH stands for Dietary Approaches to Stop Hypertension) developed by the National Institutes of Health that has been shown to reduce high blood pressure as effectively as medication.  As a food scientist I was interested in researching the diet by reading scientific papers proving its validity as well as finding articles in the popular press advocating DASH as a healthy low-salt diet.  I was excited about putting together a collection of delicious healthy recipes that could help people lower their blood pressure and improve their health.

Which section of the book was most enjoyable to write?

Delicious DASH Flavours includes recipes for breakfast, appetizers, soups, salads, vegetables, mains, breads and desserts accompanied by beautiful coloured photos.  Also included is background information on DASH research and guidelines as well as menus for a week, and tips for reducing salt in your diet.  The section I most enjoyed writing was Soups.  I tested soup recipes from chefs across Canada, changing them to meet DASH guidelines, and the variety and flavour of this collection is outstanding.  Some of my favourites include Carrot, Orange and Ginger Soup, Roasted Pear and Sweet Potato Bisque with Lobster Cakes as well as Chilled Melon Soup with Mint.

What was the most challenging part about creating this book?

I sorted through hundreds of recipes from Canadian chefs before selecting about 150 to test.  The preparation of so many dishes was an ambitious undertaking as recipes had to be altered by removing salt and lowering fat and enhancing flavour with spices, herbs and citrus.  I prepared each recipe in my kitchen and then called in family and friends to taste the dishes and give their frank opinions about taste and presentation.  If flavour was bland, the recipe was changed and prepared a second time.  If flavour could not be enhanced, the recipe was discarded.  The greatest endorsement was when the tasters said, ?This isn?t one of those low-salt dishes, is it??  It was difficult to adapt the chefs? recipes for desserts to the DASH guidelines as they were just too rich, so I added many of my own that were fruit based.

Delicious DASH Flavours has been acclaimed in the press as a wonderful, delicious collection of recipes that people enjoy whether or not they are on a salt-reduced diet.  One reviewer said, ?Delicious DASH Flavours is a great cookbook for anyone who's looking to manage their high blood pressure - or just eat less sodium, saturated fat and cholesterol. The recipes are easy to follow and truly delicious! I highly recommend it as an addition to any cook's library. ?

What?s next for you?

I have recently published a second cookbook, Low-salt DASH Dinners, which is a collection of 100 recipes (mostly my own favourite family recipes with additional ones from Canadian chefs) for simple, quick to prepare and tasty dinners, including a variety of ethnic choices as well as side dishes.  Low-salt dishes include main course salads, slow and savoury dinners, pasta, brunch and informal dinners as well as simply elegant dinners. The book is illustrated with large colour photos showing how attractively the food can be presented.
I have also written a cookbook of family favourites called Something Good, as yet unpublished.
Posted by bookclublive at 12:57 PM