5 Questions with Ray Moynihan, author of "Sex, Lies and Pharmaceuticals" 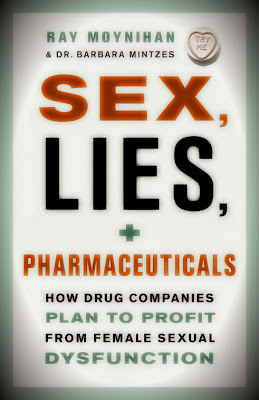 What's this book all about for people who haven't heard?

The  book is about the making of the new big blockbuster medical condition -
a condition called "Female Sexual Dysfunction". It reveals how drug
companies are actually helping to construct some of the basic scientific
building blocks of this condition - in order to help build markets for their
new products.

How did the book come about?

I have been an investigative journalist reporting on the business of
healthcare for many years - and I became interetsed in the way part of drug
company marketing strategies were aimed at "creating the need" for their new
products. One of the ways they help to "create the need", is by shaping
perceptions of the conditions their drugs target.  In about 2002 I attended
a "medical education" seminar on female sexual dysfunction, and I realized
there was a big fascinating story here.

What's the main idea you want people to realize?

That marketing is merging with medical science - and that when they hear
claims about sexual disorders and dysfunctions being widespread- they need
to be a little skeptical.

What's the response been to the book?

Very positive. all over the world. The only important criticism that I have
seen has come from the association representing the pharmaceutical industry
in Australia. They accused me of using sex to sell something.

What's next for you?

Growing some vegetables, playing some music, doing some more dancing,
hanging out at the beach some more, and getting on with the journalism.

Posted by bookclublive at 11:03 AM