5 Questions with Roger Dawson, author of Secrets of Power Negotiating 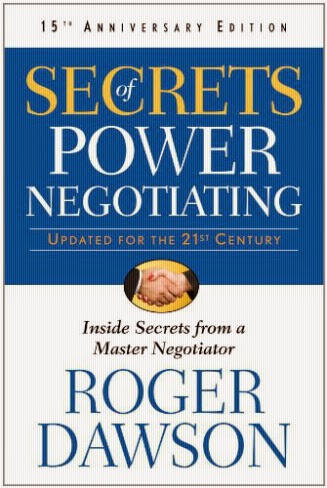 Which country has the best negotiating techniques?

Negotiating styles are so different in other countries that’s it’s hard to pick one as the best. The best negotiators are the ones that understand those differences and work with them. Americans, Germans and the Swiss are very much focused on getting the contract signed. I call that being a low context negotiator. Asians are much more focused on the relationship between the parties – they are high context negotiations.
Americans think of the contract as the end of the negotiations. In the Arab world, it’s the beginning of the negotiations. In Korea the contract is only valid as long as the conditions under which the contract was signed are valid.

What's an overlooked aspect of negotiating?

For those shy or too diplomatic to negotiate hard, is there a tip you have for them?

Shy people can be great negotiators because they listen more than they talk. That’s a big advantage. They should get over their fear of asking for concessions by practicing negotiating tactics in non-threatening situations.

Who is the best negotiator you've seen and why?

On the international scene, Ronald Reagan was a great negotiator because the had mastered the art of projecting a consistent set of values. Other countries knew exactly where he stood on key issues and knew that it would be a wasted effort to try and get concessions in those areas.

When negotiations get real tough and don't seem to be going anywhere, what advice would you give?

In my book Secrets of Power Negotiating I discuss three areas of problems with negotiating:
Impasses, which are handled by setting aside the point of conflict and reaching agreement on smaller issues to create momentum; Stalemates, which require the negotiators to reset the negotiations by changing location or negotiators; and Deadlocks, which can only resolved by bringing in a mediator or arbitrator who must be perceived as neutral by both sides.

Posted by bookclublive at 9:42 PM

Email ThisBlogThis!Share to TwitterShare to FacebookShare to Pinterest
Labels: negotiating