Interview with Arthur Plotnik, author of "Better Than Great: A Plenitudinous Compendium of Wallopingly Fresh Superlatives" 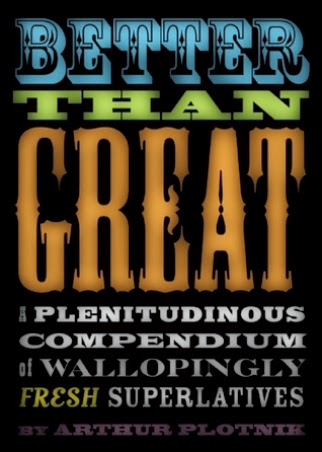 What was the most interesting part about putting together this book?

Early in the book's genesis, I felt there had to be better means of acclaiming the special things in our lives than the worn-out terms everyone seemed stuck with: awesome, amazing, incredible, and a few more of their ilk. As my list grew, my interest turned to just how many terms existed or could be created thanks to the flexibility of English. I had to stop at 5,700 for the book, but I could have done 10,000.
As I divided the terms into such categories as "Beauty," "Joy-Giving," "Sublime," and "Exceptional," something else seized my interest; namely, how many things in our lives are worthy of praise and acclaim, yet lost in the crushing negativity of our everyday valuations. An expanded, nuanced vocabulary of acclaim helps reveal the vast spectrum of joy, one that begins at relief from suffering and progresses to physical delight and intellectual and spiritual exaltation.


Which section of the book was most enjoyable to write?

Probably the category "Delicious," with its 363 terms to acclaim food and drink. How many words do people ordinarily use beyond delicious, scrumptious, and tasty? My salivary glands pulsed as I savored such terms as nectareous, eupeptic (good for digestion), honeysome, slurpworthy, and sapid. I also got to tweak—in my introduction to the category—a popular TV program featuring "ordinary" diners who critique the restaurants they've visited. To my increasing annoyance, the diners fell back on awesome, amazing, and incredible for virtually every eye-mistingly exquisite, cordon bleu dish they'd consumed.  So in dinging the show a bit, I enjoyed some saporific satisfaction.


What was the most challenging part about creating this book?

First, the labor of going word-by-word through standard and slang lexicons--some approaching a thousand pages--to find existing terms of acclaim that have not been overused, as with, say, magisterial and  numinous; and second, the intellectual work of identifying rich words and phrases that could be converted into terms of acclaim; for example, tarantella (a whirling, upbeat dance) became a tarantella on the tongue in the "Delicious" category.
Such tedious work, however, was leavened by joys of discovery---often of terms from non-U.S. countries and cultures. Canadian sources, for example, turned up such gems as milks a good cow (is in the money), skookum (strong), and kippy (attractive).

Well, God liked it—or at least one of His servants did: An Episcopalian priest kindly wrote (on Amazon.com) that he keeps Better Than Great right next to his Book of Common Prayer, using it not only for sermons, but in thanking volunteers and charitable donors.
Among mortals, I've had exuberant feedback from haters of awesome in particular and from lovers of language in general. A grandmother wrote, "Thank you! Thank you! Thank you! My granddaughter knows the word awesome is banned in my presence unless we are in church or in front of the Grand Canyon."
Media producers have been intrigued, resulting so far in eight radio interviews and a segment on Chicago's midday TV news. I've gathered some of the reviewers' raves on the book's website, if anyone wants to be overwhelmed by the love.  If you look hard through the 38 or so Amazon.com customer reviews, you'll find a few less friendly responses---but even the compiler of 5,700 pleasure-oriented superlatives can't please everyone, right?

What’s next for you?

I'm still gathering fresh superlatives and plan to produce a supplement in some form, offering a few samples on my website along the way. They're too good not to share. Here's a quick three from the category "Joy-Giving":

vellicating (causing laughter as if by a tickle; also, causing sensation of being pinched, plucked at, caused to twitch)

After that, maybe a collection of metaphors from contemporary writing. I've got a good start. But you know, picking the right project for a three-year effort reminds me of a Benjamin Kunkel metaphor in his novel Indecision: I'm "like a dog testing a vegetable dropped on the floor, to see if he will eat it.”