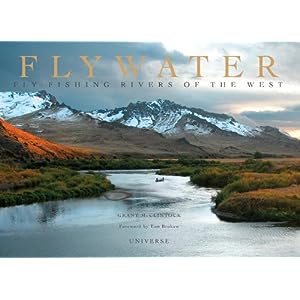 What did it mean to you to have Tom Brokaw do the forward?
Having Tom Brokaw agree to write an introduction was obviously very important to me and very generous on his part. To tell you the truth, he was a sort of dream candidate for the job and one that I never for a minute thought would accept the invitation. We did have one connection. Jack Hemingway (Ernest's son) wrote the introduction to a fly fishing book I did in 1994 (also entitled FLYWATER). Jack was a great friend and fishing pal. He was also friends with Brokaw. In fact Tom read the eulogy at Jack's funeral. So we did have some secondhand connection. What made Tom Brokaw important? He is a nationally recognized figure and (for the most part) greatly respected and he's a avid fly fisherman who loves the sport for all the right reasons. I think his introduction reflects that.


What's your favorite fly fishing destination?
My favorite fly fishing destination would have to be Montana. I've been summering there for years. I know the rivers and love them. I stay in Helena, so my home river is the Missouri which is an exciting and challenging tailwater. I also love to fish the Big Hole and the Madison. Plus I like to explore the small streams no one has heard of. All that said, I guided on the Smith River for a number of year and for beauty and fishing only the Black Canyon of the Gunnison comes close.

Which picture is your favorite from the book?
The cover. I had waited at Pelican Point on the Missouri for about about 4 hour. Terrible light. Just as I was ready to pack up, the sun peaked out and illuminated the red mountain to the left and everything came together at once. I felt blessed

What areas in Canada are prime for fly fishing?
Steelhead in BC is the best in the world. I have fished the Sustat a couple of times and the fish and enormous. I have also been to the Thompson which was beautiful and has an incredibly strong run of fish.  At the other end of the country, the Gaspe Peninsula is a real wonderland for fly angling. No doubt one of my favorite destinations. The Bonaventure is as beautiful as any river I've seen.

Do you plan to write some more fly fishing books?
Still mulling that over and I'm open to suggestions.
Posted by bookclublive at 11:47 AM