5 Questions with David Sax, author of Save the Deli 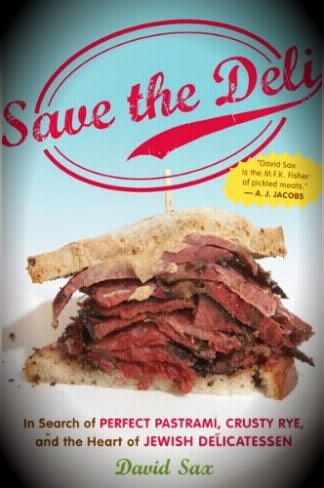 For those who haven't heard, what's the book about?


Save the Deli is an in-depth look into the history, culture, and personalities behind the Jewish delicatessen business around the world.  It's also a call to arms, as it were, because the Jewish delicatessen has been disappearing for almost a century, and I'm arguing essentially why we should care, fight for its survival, and eat more deli.

What'd you learn from your journey?

At least 320 pages worth of stuff!  But I'd say that no matter where the deli was, whether it was Paris, or Salt Lake City, or New York, the owners all had a common experience, faced common problems, served common foods, and dealt with similar customers.  Though geography and local culture left their imprint, the Jewish deli is like the Jewish experience in the Diaspora...distinct in some ways, but incredibly close in many others.

What's the best deli in Toronto?

I don't have one favorite, but many.  I grew up at Yitz's and Centre Street, love Moe Pancer's and Wolfie's, and because I live downtown, spend a good amount of time at Caplansky's.

What's the most interesting deli you've been to?

Probably Maison David in Paris.  It's just a tiny butcher shop, but the owner, Michel Kalifa, makes the most incredible kosher meats and sausages that just blow your mind.

What's next for you?

Many many sit-ups.
Posted by bookclublive at 9:27 AM