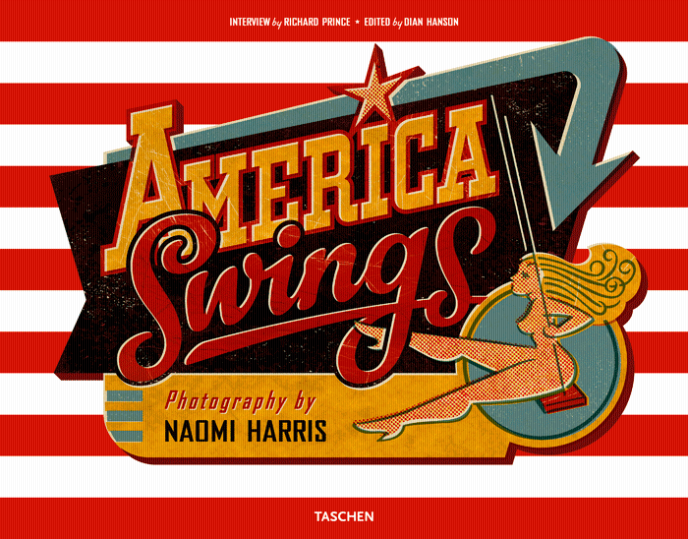 How do you come up with the concept for the book?


The concept for America Swings came about while I was living in Miami. I had moved there to photograph the residents of Haddon Hall Hotel,the last hotel in South Beach that allowed senior citizens to live there. When I wasn’t working I used to go to the nude beach. I didn’t know at first that a fair amount of these nudists were also swingers. One Sunday night, shortly before I moved away from Miami in 2002, I was invited by my friend Ron, a fellow beach goer, to be his “date” and go to a swing club (single men are not allowed to attend). He knew I was a photographer and thought I would find the scene interesting. It was in a strip mall in a very commercial part of town. Non-descript, downright seedy from the outside, but inside there was a dance floor and a large buffet complete with a chef in white with a big chef’s hat carving roast beef and serving scalloped potatoes. Everyone stuffed themselves and then 20 minutes later retired to the back room to engage in sex. You were not permitted to enter the back dressed; you had to change into a towel. As a nudist I was fine with that, as a young lady I felt like a piece of sirloin.

We went in the group sex room, which was more or less a row of about six mismatched beds pushed together. This was the first time I had ever seen anyone having sex in person. My friend leaned over to me and said “isn’t that hot?” and I nodded in agreement, but it was all I could do to contain my laughter. I found the whole situation to be hilarious perhaps because everyone else was taking it so seriously. We stayed and watched for a couple of hours but neither of us did anything. That was the understanding; I was his guest but he had no expectations of me whatsoever. When we left I knew I had to start photographing this, because no one would believe me when I told stories of what I’d seen, like the woman at 3:00 in the morning picking food from the breakfast buffet stark naked but for her heels. And I wasn’t aware of anyone who had really photographed this before.

When I returned to New York I began researching a variety of swing parties but it would be another year and a half before I began photographing. I decided on Swingstock, a four day camping and fornication festival that was held in the summer time in Wisconsin partily because I had seen it on the HBO show “Real Sex” so I knew the party organizers would be alright with having someone photographing their event. This party would be the first of about 38 parties shot over the next 48 months.

What's a big misconception about Swingers?

I think a lot of people think swingers are sexual deviants that would hump anything if given the chance but that's just not true. Swingers tend to be Caucasian, in their mid 30s to mid 50s, from the middle to upper-middle class, and are better educated than the average American. While they tend to be liberal it is usually only in their attitude towards sex as many of them are from religious Christian homes. I myself found this odd that you could have people fucking all Saturday night long only to get up the next morning to go to church. But I learned that many did not believe swinging to be a sin as having consensual sex with others with your partner present isn’t considered to be adultery. That was the biggest surprise, how conservative and straight laced many of these people would appear to be to the outside world with the exception of their penchant for extramarital sex with numerous partners.


What did you learn from this experience?

Good question. I guess I can say that I after seeing that much sex I became desensitized, sort of like someone who works in the porn industry. For me being at these parties it was all about the composition and the lighting rather than me actually observing sex. I think that helped me get through it in the end. My libido was certainly affected by this project. But I also learned a lot about human nature and my own limitations as far as sex goes. I always likened myself to be a bit of a wild child but at the end of the day I’m just plain old vanilla.


Were people shy about being photographed?

Swingers are perhaps the most out there, exhibitionistic group I’ve ever met. Everything is turned into a dirty joke that revolves around sex. And while many could not participate in being photographed for fear of losing their jobs or family, I really do think most of the swingers appreciated the fact that I wanted to promote their lifestyle in a positive manner. They allowed me into their community even though I am not a swinger myself because I embraced what they were doing. I dressed the role: if the party was a lingerie themed event I too wore a teddy, if it was a nude pool party, I photographed in the buff as well (except for my tool belt). I really think it’s important to embrace whatever culture you are trying to document and I believe they appreciated the efforts I made. Sure I had people hit on me and try to get me to participate at the parties but I graciously declined and no one seemed to mind, they would simply move onto the next person.


Who were the most interesting swingers you met?

That's really a tough one, like asking a parent who their favourite child is. I certainly hold certain people dear to my heart because they either looked out for me or opened their homes to be to photograph in. I did find that many swingers would try to take care of me and take me under their wing at these parties. Here I was, a young single girl traveling across the country by myself attending sex parties. I guess they felt the need to keep a friendly watch over me. I guess that's what's really amazing about swingers, the fact that society tends to think of them as being lust hungry and out for one thing when really swingers tend to be very sweet and caring people. I went to clubs where I saw people raising money to pay for a fellow swingers hospital bills. Or help rebuild a club members home that burned down in a fire. You don't see that every day in the "vanilla" world.
Posted by bookclublive at 9:28 AM